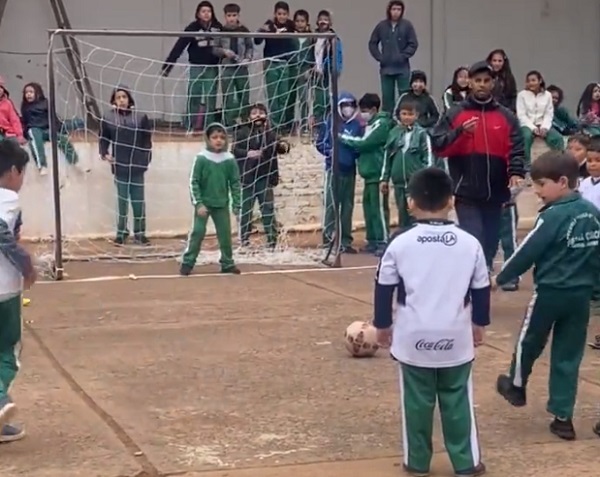 The protagonist of the viral video is Mateo Alonso, a boy of just 6 years old who wears the shirt of Club Olimpia de Paraguay. In the clip, posted on TikTok, you can see the little boy about to kick a penalty. Around him, his companions talk to him to make him uncomfortable. But he, like a professional, kept calm with only one purpose: to score the goal. And it was like that, Mateo hit an angle to give his team the victory.

But what drew applause from Internet users was their celebration. The boy ran to about the middle of the field and dropped to his knees to shout his touchdown. His friends and family celebrated with him and congratulated him on his goal.

The person who immortalized the moment was his cousin Angélica Alonso, who spoke to the media and commented that he is a staunch Olimpia fan: “He is 6 years old, the game was at his school in Cañadita, Ñemby. He is a fan of Olimpia, he is a member, he sneaked his shirt in to play his tournament at school, ”Angélica declared.

The reaction on social networks

Mateo’s video was shared on different social networks and gave a lot to talk about. It was even published by the famous sports network ESPN on its official Tik Tok account. “Winning the Recreo Cup”, can be read in his description.

Currently, the clip accumulates more than 3 million views, 500 thousand likes and more than 2 thousand comments. “He feels like an adult winning a World Cup, how beautiful childhood is”; “The pressure one feels at that moment” and “A legend is born”, could be read in the TikTok message box.