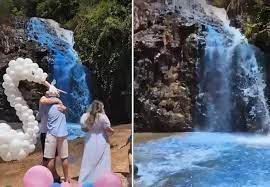 In recent times, the revelations to know the sex of the baby are “crazy” and the ideas sometimes bring with them different problems. On this occasion, a couple dyed the waterfall of drinking water in their town to spread the news.

The images were spread on social networks. Apparently, the party took place on the Queima-Pé river, in the state of Mato Grosso, Brazil. After a few hours, the sex of the baby was found out and there the blue-tinted water falls from above, that is, it is a boy.

Although at that time everything was happiness, the neighbors repudiated the actions of the people since it is the only waterfall of drinking water in the area and to which many have access.

When the facts were known, the Secretary of the Environment of the State of Mato Grosso approached the place and declared that they are investigating the damage that was caused to verify if what was thrown to dye the water was toxic or not.

Likewise, the state Public Ministry confirmed that they received a complaint from the Ombudsman’s Office and from that moment the pertinent investigations began.

The waterfall is 18 meters high and is located six kilometers from the center of the municipality of Tangará da Serrarío. As mentioned, that the river is the main source of drinking water that supplies nearby towns as well as being a regular place for tourism.

For now the couple has not ruled on the facts, but even so it is believed that they will be judged for their bad actions against the environment: “The human being has no limits to degrade nature and himself! This is a crime”, expressed a user in networks.