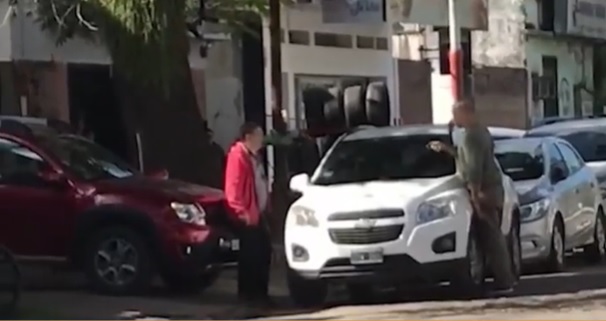 An episode of vehicular violence was made known in the last few hours through a tweet that went viral: in a video, a driver of an embroidered truck can be seen repeatedly colliding in a “gentle” way with another smaller truck that it’s parked over his garage and won’t let him out.

Noticing what was happening to his vehicle, the owner of the badly parked car approaches and they both start talking. The one in the red truck gets out and confronts him shouting: “They always do the same thing to me. You shouldn’t park on the ramp” he can hear.

The video, published by the user @mauriciocanod_, records the event that took place at the intersection of 25 de Mayo and Liniers streets in the city of Resistencia, Chaco. “Wild Tales” titled the young man. In a short time, the video added more than 27 thousand reproductions and many comments, most of them in favor of the driver of the red car.