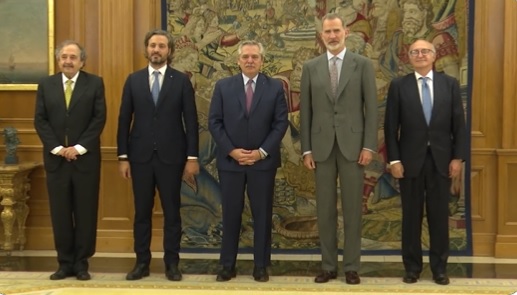 President Alberto Fernández met this Tuesday with the King of Spain, Felipe VI de Borbón, at the Palacio de la Zarzuela, in Madrid, in what was his second activity within the framework of his tour of Europe. Previously, the Argentine president had held a meeting with his Spanish counterpart, Pedro Sánchez.

In the meeting with Sánchez, Fernández raised with the president the possibility of Argentina becoming a “stable and secure supplier” of food and energy, in the context of the war in Ukraine, in a meeting that lasted for an hour and a half. twenty minutes minutes at the Palacio de la Moncloa.

The president arrived this Tuesday at around 10:00 local time (4:53 in Argentina) at the Adolfo Suárez-Barajas International Airport, accompanied by Foreign Minister Santiago Cafiero; the Secretaries of International Economic Relations, Cecilia Todesca; of Strategic Affairs, Gustavo Beliz; the Secretary General of the Presidency, Julio Vitobello, and the spokeswoman Gabriela Cerruti.