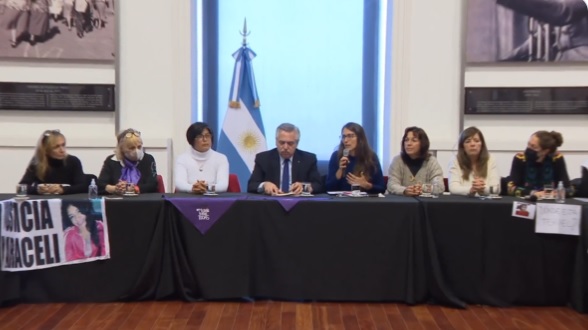 Prior to the national mobilization to claim against gender violence, organized by the Ni Una Menos collective, President Alberto Fernández met at Government House with a group of relatives of victims of femicides. The objective was, indicated the national authorities, to listen to the particularities of each case and act accordingly.

“Several of them had requested an interview with the President, who decided to receive them today on such a sensitive and particular day for the citizenry. We listen centrally to the particularities of each case, since not all situations are the same: there is a huge difference when a case has justice and others do not”, explained the Minister of Women, Gender and Diversity, Elizabeth Gómez Alcorta, in statements to the press after the meeting.

The official explained that the President “understood that it was a way of making visible these facts that were still unpunished, to the respective provinces, so that in their spheres of competence they would take the measures they had to take.”

In a message posted this morning on his Twitter account, the head of state recalled that “7 years ago women and LGBTI+ raised their voices to the cry of #NiUnaMenos” and that “from the Government, we listened to the demand of the streets and We translated it into public policies to accompany those who go through situations of gender violence on their way to a free life”.

The motto of this year’s march is “The State and the governments are responsible! Alive, free and without debt, we love each other.” In Córdoba, the concentration will begin at 5:00 p.m. and the march will start at 6:00 p.m. from Colón and Cañada.