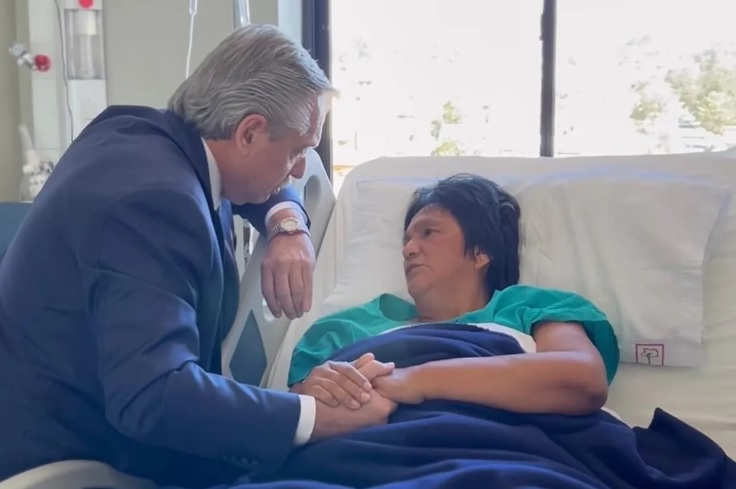 President Alberto Fernández visited this Wednesday the political leader Milagro Sala, who has been hospitalized for a few days with the diagnosis of “acute venous thrombosis” at the Los Lapachos clinic. Her talk was recorded in several videos and photographs with affectionate messages from the president to the detainee for corruption: “There are many of us who want to see you well.”

After her visit, Fernández gave a press conference at the hospital where Sala is hospitalized, where she stated that she is a “political prisoner” who suffers “persecution.” Criticizing the Justice and Governor Gerardo Morales, the President affirmed that “No society works well without a rule of law that respects human rights. Prolonging preventive detention is a way of violating human rights.”

“It is a paradigmatic case in Argentina. I do not want what happens to Milagro to happen to any Argentine. I am not asking for his innocence, but I am asking for a trial that respects Argentine law, that the trials be carried out without political pressure, without persecutory intentions, only with due process,” said Fernández, who traveled to the province accompanied by the spokeswoman for the Presidency, Gabriela Cerruti; the Secretary General of the Presidency, Julio Vitobello; the Secretary of Human Rights, Horacio Pietragalla Corti; Deputy Eduardo Valdés; and the adviser and philosopher Ricardo Forster.

Meanwhile, at the door of the hospital, a group of neighbors demonstrated, rejecting the president’s visit to the detainee with posters with legends such as “Jujuy ignored”, “We are also Argentines”, or “Victims of Miracle Sala”.