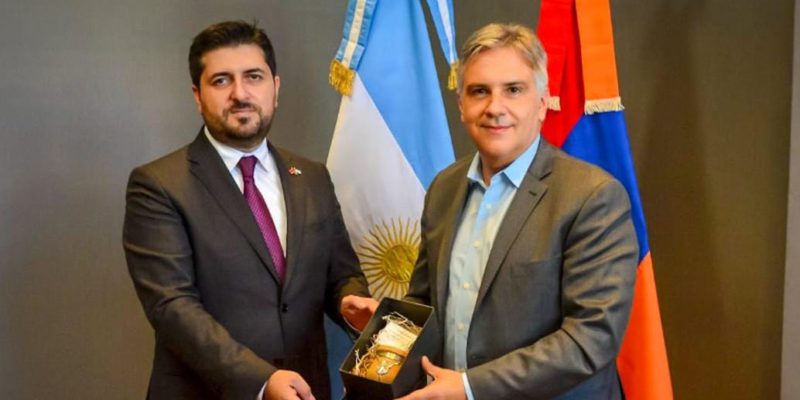 Mayor Martín Llaryora received a visit from the Armenian ambassador to Argentina, Hovhannes Virabyan; together with the future Honorary Consul in Córdoba, Juan Carlos Merdinian; and the president of the Armenian Collective of Córdoba, Lilian Balián. During the meeting, the creation of the Honorary Consulate of Armenia in Córdoba, the first in the interior of the country, was announced.

The creation of the Honorary Consulate of Armenia in Córdoba will bring the Armenian State closer to the community that resides in Córdoba and thus facilitate access to information and consultations. Other joint collaboration plans and the promotion of university and commercial exchange were also discussed.

Within the framework of the visit of the Ambassador of Armenia, the Armenian Community presented a photographic exhibition “Armenia: Millennial and Young” in the Cabildo de Córdoba, for the 30th anniversary of diplomatic relations between Armenia and Argentina.

At the opening of the exhibition, the Secretary of Planning, Modernization and International Relations, Alejandra Torres, stated: “The Armenian community is very important for Córdoba, since it has collaborated with the growth and development of an entire sector of our city. It is a pleasure to be able to promote the strengthening of ties with the Armenian State, in order to jointly work on the axes of cultural, educational and commercial exchange. We have many projects of great value, we are very excited”.