Demonstrations in front of the CFK house ended in riots 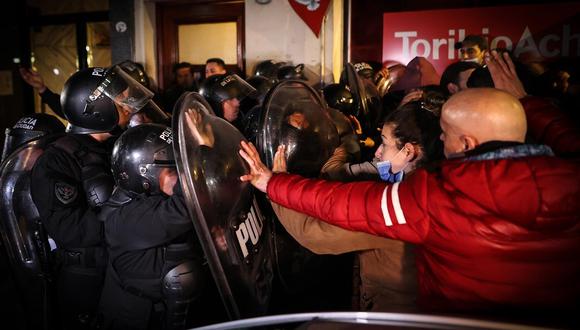 Demonstrations in front of the CFK house ended in riots

Moments of extreme tension were experienced this Monday night in front of the building where Cristina Kirchner resides in the Buenos Aires neighborhood of Recoleta, when a group of people demonstrated against the vice president and another in favor, after the request for 12 years in prison by prosecutors who act in the cause of public works.

Cristina Kirchner’s militants arrived at the place late in the afternoon, after earlier people were found there demonstrating against the former president, banging pots and pans.

At that time, police officers interceded so that there would be no clashes between the factions in front of the home of the former head of state, located at 1300 Uruguay Street in the Recoleta neighborhood of Buenos Aires.

The agents made a cordon to keep both sides apart. In this context, there were struggles, incidents and police officers fired pepper spray.

In addition, there was the arrest by the Police of the City of Buenos Aires of the provincial deputy of the Front of All, Adrián Grana.

Sources from the force indicated that he was delayed for about an hour and then released, since he has privileges for being a provincial legislator.