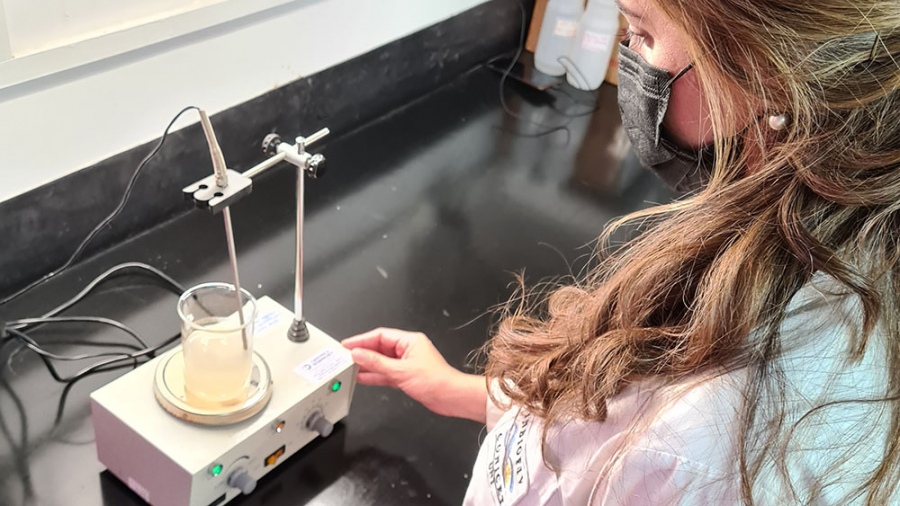 From the Laboratory of Polymers and Composite Materials of the Department of Physics of Exact and Natural Sciences of the UBA, the researcher of the National Council for Scientific and Technical Research Lucía Famá explained that there they make biodegradable films based on cassava, potato and corn through a medium-sized commercial extruder for possible industrial scaling. In this regard, Famá indicated that in addition to working with starches, especially with cassava, there were tests with flour and starch together with different components.

“One of the last works was the study of films from oat bran and wheat bran that could be processed by extrusion and generate films”, commented the doctor in Physics.

They also work with mixtures of starch and other polymers such as polylactic acid, which “is a biodegradable material that is more resistant than starch, so a material that is much more elastic and resistant to the applied force can be generated,” he added. This year they did the first tests with this mixture and obtained good results. “The idea is to incorporate extracts of basil, yerba mate or green tea into this material, whichever is most beneficial according to preliminary tests, in order to generate a material that is mechanically resistant and also active.” In this sense, the objective is to have biodegradable, functional materials that have an activity that improves the wrapped product.

The researcher from the Laboratory of Polymers and Composite Materials explained that green tea, yerba mate and basil have polyphenols with antioxidant properties. In the tests, it was observed that when the extract is added, the film releases the antioxidant capacity of the food it is covering, which facilitates its preservation. “We are also incorporating antimicrobial nanoparticles into these materials. Thus, the film would work with two effects that add to the protection of the food. One, that it oxidizes more slowly than with a conventional film and, second, it delays the appearance of microbes », she pointed out.

These films can also form part of a multi-layer container such as those currently used in plastic. Famá pointed out that in this way “the non-biodegradable character of these containers would be reduced because they would have a certain percentage of totally biodegradable and compostable components, helping to reduce the number of microplastics in the soil and in the sea.”

With the newest material that they are studying at the LP&MC with mixtures of starch with polymers such as polylactic acid, in the future they could replace the plastic containers that are usually used in food sales businesses such as delicatessens. Starch-based materials take a month to degrade, while both polylactic acid and “different polymers that are being implemented in the study to replace another kind of plastic degrade in about six months,” said Famá.