Fernández and Massa, together in Santa Fe • Channel C 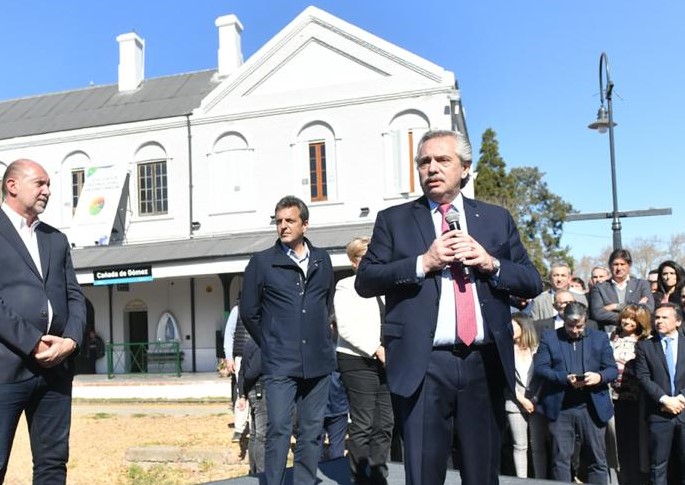 This Friday, President Alberto Fernández appeared for the first time with Sergio Massa during the reactivation of the train that connects Cañada de Gómez with Rosario, in the province of Santa Fe. During his speech, the president highlighted the task that he carried out in the reestablishment of the unity of the Front of All, and highlighted the production of the field, a sector that earned him repeated criticism in recent weeks.

“We are a federal country, and we must unite more than ever, and when I speak of unity I am not only speaking of the unity of our comrades from the Front of All for whose unity I fought and will always fight, but I believe that we must go one step further, in the unity of Argentines so that we understand that we have a great opportunity and we must not waste it,” the head of state shouted to the residents of the area.

Read more: Gabriel Rubinstein will be the Vice Minister of Economy

Accompanied by the Ministers of Economy and Transport, Alexis Guerrera, both men from the Renovador Front; the governor of the province, Omar Perotti; and the mayor of Cañada de Gómez, Stella Clérici, the President described the importance of the train as a key tool for the country’s economic reactivation, and made a surprising mention of the area’s agricultural sector.

“We see the importance of the production of the entire Santa Fe, Córdoba, Entre Ríos countryside that needs the driving force of the train to take its grains, its production to the waterway and from there to the Atlantic. The train connects us and the train unites us” Fernandez said after touring the railroad cars that have a capacity for 900 passengers, and that estimates to mobilize 2,000 people between the 71 kilometers that separate the Rosario Norte and Cañada de Gómez stations.

Also: Fernández and Massa met to evaluate the measures and the “road map”

In another part of the speech, Alberto Fernández made reference to the economic crisis and questioned, once again, the “financial speculators and price gougers”: “We came to the Government with a decision, to put Argentina on its feet and we need a more just federal development with decent work with which And what I want to say is that we are going through difficult economic times, and some are in charge of making it even more difficult for us, but even so, not even their will is going to bend our decision; and Sergio (Massa) knows, as I do, the obligation that we have with each one of you,” he stressed.

Read: Darío Martínez resigned from the Secretary of Energy