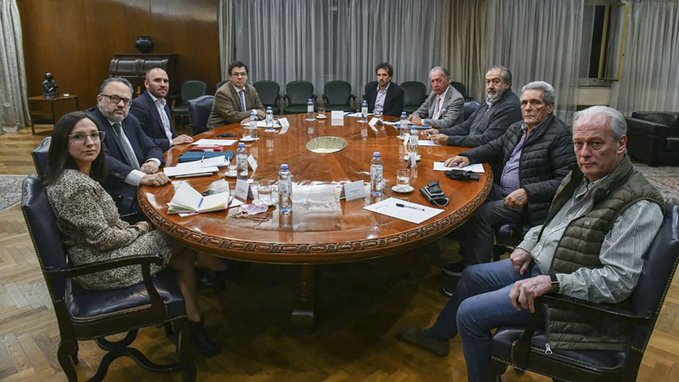 The National Government met again yesterday with businessmen and the CGT, with whom it advanced in a framework for subsequent agreements tending to curb inflation. The meeting took place at the Ministry of Economy, with the participation of Minister Martín Guzmán; Productive Development, Matías Kulfas; and Labor, Claudio Moroni.

Representing the business sector was the president of the Argentine Industrial Union (UIA), Daniel Funes de Rioja, together with the entity’s secretary, Miguel Angel Rodríguez, and the executive director, Diego Coatz.

Meanwhile, the general secretaries of the General Confederation of Labor (CGT) Héctor Daer and Carlos Acuña participated together with the deputy general secretary of the entity, Andrés Rodríguez. According to reports, the CGT put on the table its request for a $10,000 bonus to be granted to private individuals, in line with the announcement made by the Government for retirees of the minimum.

The parties agreed that “the macroeconomic program presented by the Argentine government is a significant step to face the challenges of advancing towards sustained economic growth with social and productive inclusion and a path of recovery of reserves that strengthens macroeconomic stability”, according to reported the Noticias Argentinas agency.

“The parties agree on the need to expand the work table incorporating sectors of commerce, construction, agriculture and the knowledge economy and on the need to intensify the work meetings to be able to elevate the President of the Nation to a set of proposals in the shortest time possible, convening a next meeting for next Tuesday, April 5”.

From the Employment Secretariat together with Minister Claudio Moroni we met with union sectors to work and promote professional training and training for the creation and growth of employment #ReconstructionArgentina 🇦🇷 pic.twitter.com/8frQmkMmxb