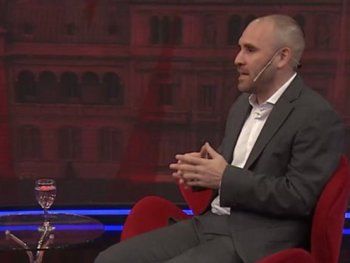 The Minister of Economy, Martín Guzmán, anticipated that “inflation in March will be higher than 6%” and called for “political support” to implement the economic program approved in the agreement with the International Monetary Fund (IMF), avoiding generating “uncertainty” about decision making.

The minister proposed as axes of the ongoing program the accumulation of reserves, support for the productive sectors that generate reserves and a reduction in the monetary issue to cover the fiscal deficit. As part of the conversation, the minister revealed that the president expressed his willingness to “go ahead with the program that we consider to be the best for Argentina” and remarked that “we will manage with the people who are aligned with the government’s economic plan ”.

When asked about a possible increase in withholdings, Guzmán ruled out that possibility but admitted that “a mechanism is being sought to capture the extraordinary income that was generated from a shock that has nothing to do with investment or job creation. .

In another order, he assured that “the energy supply is guaranteed” during the coming months after the agreements closed with Brazil and Bolivia.

🚨URGENT🚨
I speak @Martin_M_Guzman : “Inflation in March is going to be above 6%” pic.twitter.com/16vhjL2wOW