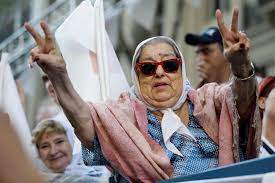 Hebe’s appearance in the media never goes unnoticed, so much so that in recent years the president of Madres de Plaza de Mayo has made statements that have generated great controversy and repercussion in Argentine society. The convulsive times that are lived in the country where the idea of ​​the crack refloats from time to time have placed Bonafini in the center of the scene once again.

In a video that recently began to circulate, during the delivery of the handkerchief to the mayor of Pehuajó, Pablo Zurro, the head of the organization took a few minutes to make a particular request. Bonafini called for a “pueblada” to defend Cristina Fernández de Kirchner and in this way prevent her from going to jail for the road cause, a trial that is in the stage of prosecutors’ allegations.

“I want to take this opportunity to continue saying that we have to start putting together a town, we cannot allow Cristina to be convicted or taken to jail.” While affirming that a “pueblada” is the only thing that will save her.