Horror in the Kairós neighborhood, he murdered his nephew with a machete and injured two other relatives • Channel C 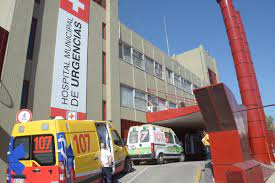 A man killed his 12-year-old nephew with a machete, injured his mother (56) and sister (38), everything happened this Saturday afternoon in the Kairós neighborhood, the reasons for the attack are still unknown. The murderer had to be hospitalized because he also had cuts and head trauma.

According to police sources, the murderer is a 28-year-old man. When the troops entered the house, the subject was in a totally violent state and “out of his mind”.

At the time the police arrived, the 12-year-old boy was alive but his condition was critical, so he had to enter emergency surgery, but unfortunately he died shortly after.

On the other hand, the remaining Two victims were seriously injured, so they were taken to the Emergency Hospital, where they had to undergo surgery. Her sister had a stab wound to her skull and another to her abdominal area. Meanwhile, her mother had a cut on her face and another on her head. Both victims lost brain mass, so their condition is critical.

The murderer also had several cuts, so he also had to be taken to the emergency room and is currently hospitalized at the Cáceres de Allende Transit Hospital. He was diagnosed with head trauma, he had several cuts on his cheekbones and head, he also had bruises on one arm.

The case was left in the hands of the Family Violence Prosecutor, Cristian Griffi, who is already working to investigate the details of what happened.