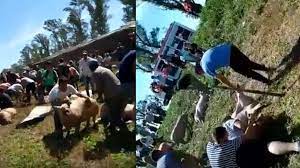 As part of the investigation into the theft of hundreds of pigs after the overturning of a cage truck on Route 9, between Marcos Juárez and General Roca, prosecutor Fernando Epelde ordered 20 raids on Tuesday afternoon in which they were kidnapped near thousand kilos of pork, cars, vans, cell phones and 30 people were identified, although no arrests were made.

It should be remembered that on Monday afternoon, after the overturning of a three-story cage truck in the area and after the rescue operation by firefighters and police in the province, hundreds of people pounced on the animals that were left loose with purpose of robbery and even in some cases, they were slaughtered on the spot.

Through a statement, the Public Prosecutor’s Office reported that after the kidnappings carried out in the framework of the raids, the bromatological analysis of the confiscated meat was ordered, while the process of collecting evidence for the open case ex officio by the Prosecutor of Instruction of Marcos Juárez, in which up to now there are no accused.

The fact that caused surprise and stupor after the images went viral through social networks, generated a wide social debate about what happened. The police authorities estimated that after the overturn they were able to rescue about a hundred animals, although it is estimated that at least another hundred could not be recovered.