“Kirchnerism sees another country, we will never agree” • Channel C 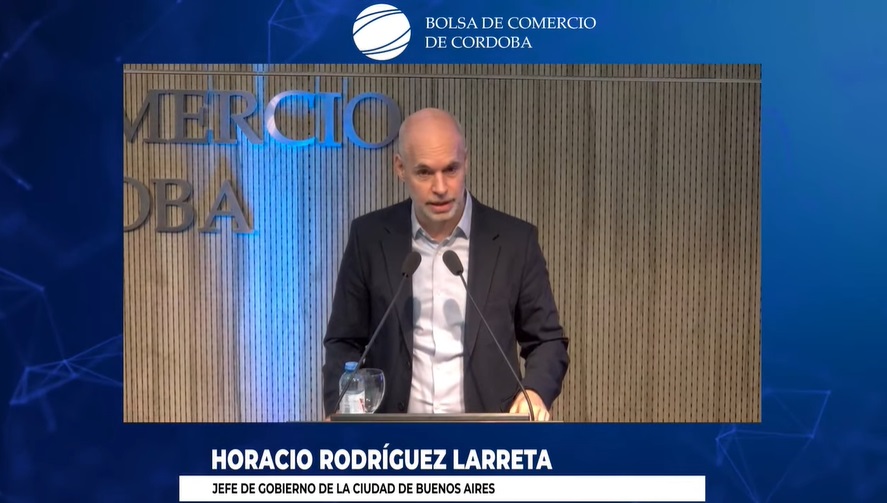 Horacio Rodríguez Larreta, head of the Government of the Autonomous City of Buenos Aires, spoke this Friday at the Stock Exchange within the framework of a new Situation Cycle, organized by that entity so that different references of the country’s economy and politics can analyze and discuss the reality that Argentina is going through.

During a brief introduction, the economist Guido Sandleris took the floor to reflect on the reality of the country: “Were there cuts? Until now, the cut announcements come in items that were hardly going to be used. There are few measures that are going to generate a change in the next year, when even more increases will come,” Sanlderis said.

Then, Manuel Tagle, head of the Stock Exchange, took the stage to welcome the head of government, but also to recall the body’s rejection of the attack suffered by Cristina Fernández, also indicating that events of these characteristics “should not being used for political purposes by the vice president’s party, takes away the seriousness and authenticity of the event. It generates risks that the country is not willing to go through and assume. I hope the truth of the event is discovered and that we all have more peace of mind.”

“Córdoba has the virtue of having a logical thought from the economic and political point of view, and that encourages it to continue being a factor of change in Argentina”

Next, it was Rodríguez Larreta’s turn to give his analysis speech. “What needs to be done is what economists have been saying for 20 years. Recreate capitalism in Argentina, stable rules over time, stabilize the economy,” he considered, in addition to mentioning that it is necessary to “cut spending” of the State , cutting the monetary issue and taxes. “That has to be sustainable over time, we must generate a stable pension system, and everything must be accompanied by a development plan that includes a chapter on lowering inflation. If we don’t get Argentina to grow again, it doesn’t hold up.” “, considered the official in terms of the economic plan.

“Since the war, the world needs what Argentina produces: energy and food. And even if the war ends, Russia will not be reliable for three or four decades, and that is what must be taken advantage of.” In the current productive context, Rodríguez Larreta stated that companies cannot find predictability in the economy, so that hinders production.

“The great challenge in Argentina is that we can draw up a plan with the greatest possible political support and that is sustained over time. If we do not succeed, the chances of success are zero. Let’s not waste any more time. The discussion is political,” he maintained. “More serious than socialism is volatility. We had 40 years of fights to the death, and 40 years of democracy, where each new government is a refounder of Argentina. There is no way to build a country on the basis of a pendulum”

“Kirchnerism sees another country, we will never agree. People who believe that prices are going to go down by sending militants from La Cámpora to supermarkets”

Regarding the situation in CABA, the head of the Buenos Aires Government clarified that the agreement between the parties that make up the policy is the key to success: “What I say I have to support in the facts, and if I put it It is with the certainty that in the City of Buenos Aires there is consensus between parties. With that heterogeneity we made the greatest transformation that people see and value. That is called politics, and it takes time. But it gives solidity to the transformation that you see today in Buenos Aires”. Together for Change “is working more than a year before the election” to elaborate from within the party to “agree on a plan around a series of guidelines,” he asserted.

“If the unity and seriousness of our deputies had not stopped the judicial reform, the reform of the prosecution, the Council of the Magistracy and the increase in the members of the Court” the “institutional destruction” would accelerate. We would be discussing whether we have a country democratic or not,” he said, while stating: “It is the first time since the return to democracy that the opposition has remained united.” In this order, “Diversity must be managed, the opposition is heterogeneous, if it were homogeneous we would not win the election. We have to make a true coalition government. In a federal country, the plan is as important at the national level as it is at the provincial and communal levels” . “Well managed differences enrich us”.

“There is a majority of people who value the firmness that must be had to seek the consensus that must be had for things to be resolved,” said the Buenos Aires official, once again taking the case of the City of Buenos Aires as an example. “In 30 years, when they evaluate my management, it is the most important transformation we have had. Today we have the lowest crime rate in the history of CABA since there is a record, the lowest rate of all the capitals of Latin America. Yes, It takes time, but it’s the way. I’m not going to follow the path of extreme confrontation.”

“There is no need to apologize for moderation, when I had to fight I did it. The firmness that serves is the one that solves people’s problems. With this phrase, he made reference to the fence that was placed around the vice president’s house during the days that the demonstration lasted in support of the cause of corruption and the request of prosecutor Luciani: “The fences were not an end in themselves I came from a zone of the city that had been occupied for 5 days. I sent my officials to agree with the National Government, and as of the meeting there was not a single person left in the zone, with no escalation of violence. Results. Choosing between what I think is best for the people of my city or what some extremes value from a political positionI choose to solve the problem.

“Well-managed differences enrich us. That well-managed heterogeneity is what makes us win the election.”

Regarding the constant protests not only in the territory of the Capital, but throughout the country, he said: “First you have to settle it. But we must end the intermediation of social plans. This government privatized social policy in so-called social organizations that are political and that no one voted for. Those people decide who gets a plan and who doesn’t, which gives them an infinite element of pressure to make them go to the marches.”

Regarding social plans, Rodríguez Larreta said: “Possibly the biggest condition of some social plans is that the children go to school, that used to be done with a regular student certificate that was presented in March and the rest of the year it was not requested. In the City now we know what day each boy goes. If you do not have 85% of schooling and the first thing we do is send a social worker. If we cannot recover the boy in 3 months the plan is cut until I go back to schoolThis has to be done throughout the country.”