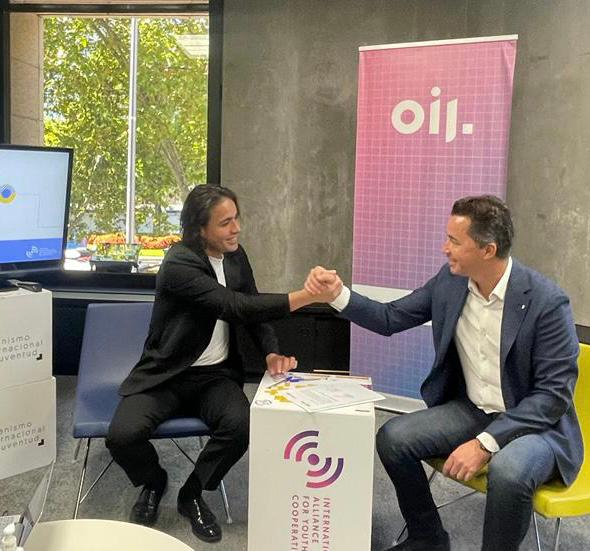 Deputy Governor Manuel Calvo signed this Monday in Madrid, Spain, a mutual cooperation agreement with the International Youth Organization for Ibero-America (OIJ) represented by Max Trejo Cervantes in his capacity as Secretary General. The agreement aims to promote the participation of young people in public affairs.

In this context, Deputy Governor Manuel Calvo explained that “Young people are the protagonists of our society, with specific needs for learning and participation in issues related to innovation, digitization, climate change, social and political participation, and this agreement precisely promotes the articulation of activities, programs and actions that allow empowering young people. youth of our province on these issues”. Through specific agreements, the Legislature and the OIJ will facilitate access to those tools that allow young people to participate, decide and influence decision-making processes on public agenda issues.

In his turn, Max Trejo celebrated that this agreement between the Legislature and the OIJ “which will allow us to take actions in favor of young people, first by recognizing them as subjects of rights because it will allow us to adhere to the International Treaty on the Rights of Young People to become a reality in Córdoba. What a joy to carry out dynamics of entrepreneurship, laboratory and participation and many other actions that we will carry out in the province”, said.

At the end, the secretary of the OIJ recognized the interest of the Legislature in the staff of Deputy Governor Manuel Calvo “for always being close to the youth, for being procuring these international initiatives of global thinking for current local”he claimed.

With this agreement, and as part of the strategic plan of the current administration, the Legislature reaffirms its commitment to an Open Legislature, linked to the citizenry by “recognizing the importance of the participation of our young people in the public agenda, in the discussion of issues of interest and in their empowerment as strategic actors in society,” said the lieutenant governor.