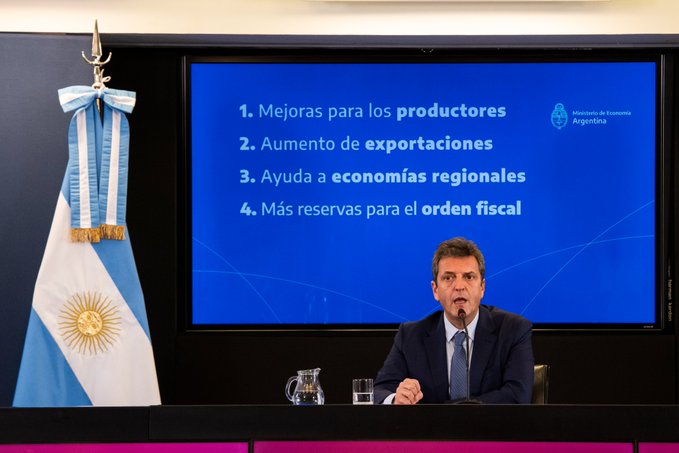 The Minister of Economy, Sergio Massa, announced an agreement with the agribusiness sector by which foreign exchange income of US$5,000 million will be guaranteed during September, and soybean producers will be recognized one dollar to $200, equivalent to “zero withholdings “.

The measure, in force only for the soybean complex, will represent a fiscal effort of at least $600,000 million and the expected fiscal result is about $200,000 million, Massa specified. It will be valid until September 30, and Massa said that the producer will be recognized a slate price of between $70,000 and $75,000 per ton.

Massa said that it is a “simple measure for the producer, since he can look at the price of slate in the Rosario Stock Exchange, charge in his account and can choose to use the resources to buy inputs or use the chacarero account or link account in all the banks.

“In net terms, it represents the same as if it were 0 withholdings for the producer,” said the head of the Palacio de Hacienda. It is a lateral round of the Single Free Exchange Market, transitory for 25 days that begins on Monday and ends on September 30, Massa said.

He also said that the Government “aspires that this very month of September we have the treatment in Parliament of the Agroindustry Law.”

Since @Economia_AR We announced a measure that will allow producers to liquidate foreign exchange for soybean exports at 200 pesos per dollar.
The program seeks to promote exports, improve the reality of producers, help regional economies and strengthen reserves. pic.twitter.com/Q4gXt36Zsi