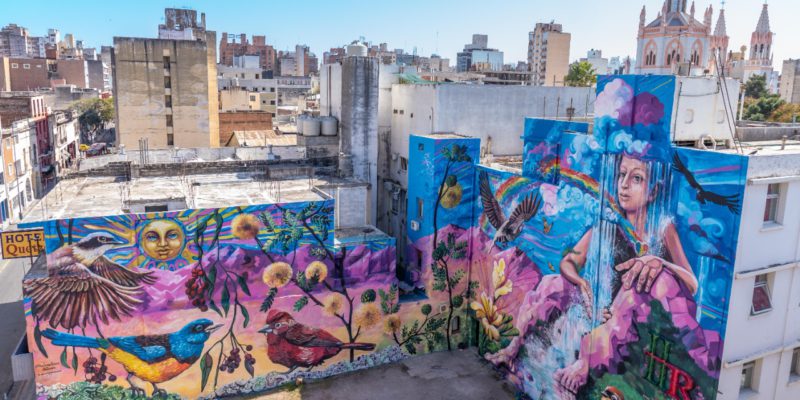 The Municipality of Córdoba, through its Ministry of Culture, advances in the revaluation of the public space of the city, with different actions. Among them, the “Art of Our People” program stands out, an initiative that adds a new urban art mural in the downtown area, around life in nature and the mountains as a mark of Cordovan identity.

“La Serranía” was in charge of the Cordovan artist Ariel Ocampo, and captures elements of the flora and fauna of the mountain environment of Córdoba.

The intervention is an explosion of color that makes its way through the gray cement, like a great breath of fresh air, a natural injection of life. The finished work is located on the walls of the parking lot of the Hotel Riviera, between Balcarce and San Jerónimo streets, extending for a total of 630 m2. Right in the hotel area of ​​the Bus Terminal, the mural offers a bath of healing magic from the mountains.

The painting is based on the knowledge that the first tourists arrived in search of that “healthy air”, recommended by the doctors of the time.

The story portrays that years ago the visitors who came to the city got off the train loaded with hope of recovering the promised quality of life and these lodgings became their first stop. At that time, from the windows you could glimpse the mountains to the west, outlined in sunsets of fire, as a first sign that they were close to finding what they had come to look for.

Currently, many Cordovans and tourists continue to inhabit these lodgings facing some medical treatment or similar challenges. In this sense, the mural aims to recreate that environment full of hope and vital energy to overcome adversity.

The intervention is starred by “La Serranía” as a giant with a sensitive soul, full of fresh air and the flow of rivers. It proposes a healing message of harmony and coexistence in freedom and diversity.

“Art of Our People”

Urban art program of the Secretary of Culture of the Municipality of Córdoba, promoted by the management of the mayor Martín Llaryora, whose objective is to value the public space of Córdoba, promoting the encounter with art and the community.

Likewise, it aims to revalue the identity of the city and art, in addition to stimulating citizen participation.

So far, 113,000 m2 have been intervened in different dividing walls, spaces and bridges. It rounds out 327 murals carried out by more than 360 local artists. It summarizes extremely diverse styles, techniques and themes, connected by local culture and urbanity.

As a result of their intense work, in August 2021, the City Council declared Córdoba “Capital of Urban Art”.