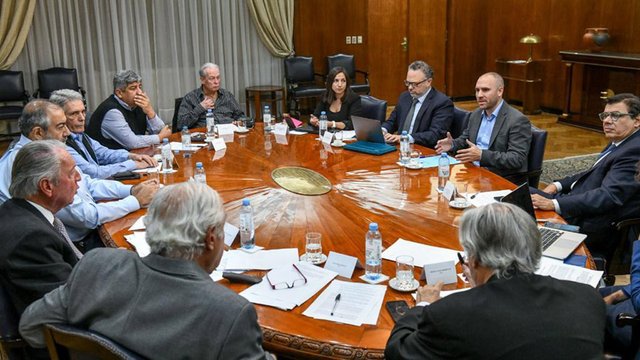 The national government once again held a meeting with representatives of the General Confederation of Labor (CGT) and the Argentine Industrial Union (UIA) in which they agreed to advance parities and present a basic basket of basic necessities.

The meeting lasted two hours at the Ministry of Economy, with the participation of ministers Martín Guzmán (Economy), Claudio Moroni (Labor) and Matías Kulfas (Productive Development). Pablo Moyano, Héctor Daer, Carlos Acuña and Andrés Rodríguez participated on behalf of the labor union, while its head, Daniel Funes de Rioja, was present for the Unión Industrial sector.

“With the aim of improving the purchasing power of wages, the CGT requests that, in the face of the possible evolution of the cost of living in the framework of this exceptional situation, the opening of negotiation of those wage agreements that have not yet expired be anticipated. or they are not in the negotiating stage”, indicates the document signed by those present at the meeting.

At that point, the UIA expressed its “conformity with the request made” by the workers’ union, considering that “social dialogue allows generating the appropriate policies for economic development with social inclusion.”

Also, from the Argentine industrial sector they argued that “setting wages through collective bargaining is the appropriate tool to achieve an increase in wages.”

In this framework, they agreed to present “a basic necessity basket, made up of between 50 and 60 products, which have a clear price in the different marketing formats, which will be widely distributed.”

The meeting took place at the request of President Alberto Fernández, to establish a table for dialogue and social agreement aimed at strengthening the economic reactivation in an articulated manner with the creation of jobs and the improvement in the real income of the population.