Shows of the week to enjoy in the city • Channel C 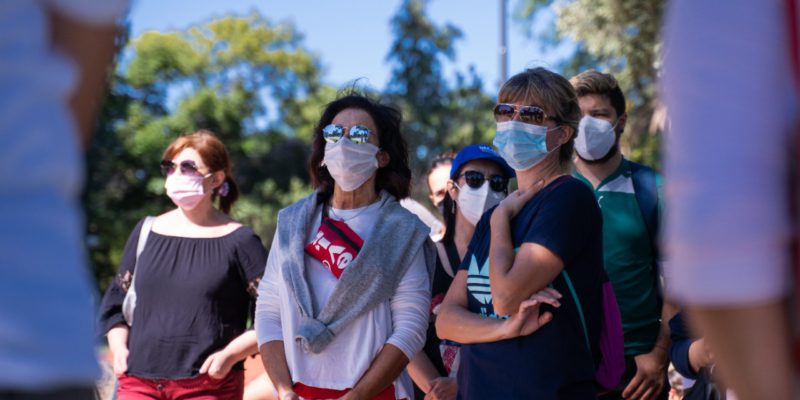 Cristi is a policeman who refuses to arrest a young boy who offers hashish to two of his classmates. “Offering” he is punished by law. Cristi believes that the laws will change and he does not want to have the life of an irresponsible boy on his conscience. But for his superior, the word conscience has a completely different meaning… Selected by Romania as a candidate for the 2010 Oscar in the category of “Best Foreign Language Film”. Free and free entry.

At 9:00 p.m. From the Atelier of Mateo Argüello Pitt

Mateo Argüello Pitt was born in Córdoba, Argentina in 1971. He has a degree in Painting from the National University of Córdoba and also studied with the artists Carlos Crespo, Remo Bianchedi and Tulio de Sagastizábal.

Among his solo shows, the 2010 show at the E. Sívori Museum in Bs. As. stands out, in 2002 at the Argentine gallery in Paris, and his solo shows at the Caraffa Museum in 1998 and 2011. Among his main distinctions the Special Mention of the jury at the National Drawing Salon in 2015, the Cultural Equality Award in 2013, the First Prize at the IV Banco de Córdoba Painting Salon in 2013, the Jury Mention at the Rafaela National Painting Biennial in 2013, the Lufthansa Award, “XX National Hall Fundación Pro Arte Córdoba” in 2001, and the First Prize “Federal Hall 2000 of

Painting”, CFI, Buenos. Aires in 2000. He currently lives and works in Agua de Oro, Province of Córdoba. You can follow it on YouTube CulturaCBA

The Directors Cycle pays tribute, a century after her birth, to María Luisa Bemberg who, from the beginning of her career, took a critical stance to expose the mandates of patriarchy and claim the rights of women in society. In addition, she paved the way for many screenwriters and directors who remember her as one of the pioneers of Argentine cinema made by women. This time she is projected “Camila”. A film based on real events that narrates the love story between the aristocrat Camila O’Gorman and the priest Ladislao Gutiérrez in the 19th century. A relationship that caused the scandal between the church and the society of the time. Free entrance

A work by the music-theater company Lucy la Nuit that proposes, through an archaeological search for historical reconstruction, to rescue and make known the artistic, vital and political career of Esmeralda Cervantes: the harpist of Queen Elizabeth II. A documentary, narrative and creative piece is presented whose problem revolves around this figure and its historical moment. Tickets 600 pesos available through the site autoentrada.com and at the theater box office. Repeat on Friday 29 and Saturday 30 at 8:30 p.m.

A couple builds a space to live. When it is finished, before inhabiting it, they invite a group of people to visit it. The invited people circulate individually through this new and empty space. They look, they walk, they talk. The film tries to rescue the effect of that experience in each one of them. So the space itself becomes an experience. What will they leave of themselves? What will they take? What will they show of the human? What is a house? What is done with the past? The series of people who briefly inhabit that place, recently built, still free of all traces, could be thought of as infinite. Space fills and empties. The residual of that transit remains: a luminous fragility. Repeat on Friday 29 at 7:30 p.m. and Saturday 30 at 9:00 p.m. General admission 150 pesos; students and retirees, 100.

Directed and adapted by Manuel González Gil, Soledad Silveyra and Veronica Llinás They stage the play Dos Locas de Remate. The story narrates the reunion of two sisters who meet again after 20 years in a funny and hilarious duel, where they will have to overcome their past in order to have a future, giving rise to a crazy tragicomedy that shows the social background of complex family relationships. “We are all one step away from insanity.”
Recommended age for over 13 years. Numbered tickets at the Theater box office: Platea: $3,000, 1st level: $3,000, 2nd level: $2,800, 3rd level: $2,500.

On-site talk about the Chisporroteos exhibition with the presence of the artist Pablo Peisino. After the conversation, there will be a mini recital by the musician Mauricio Manchón. Free and free entry.

As part of the free activities, the new edition of the Tangos cycle is presented at the Center by the Municipal Ensemble of Citizen Music. The Municipal Citizen Music Ensemble was established in 2004 with the purpose of representing a universal genre such as tango. The city of Córdoba made its contribution to this movement at the hands of composers such as Edmundo Cartos, Cristino Tapia, Ciriaco Ortiz, Zenobio Gómez, Valeriano Reina, Julio Morcillo, among others. The purpose of the Ensemble is not only to recreate tango classics, but also to rescue unknown compositions and add current pieces and those of today’s composers as a way of keeping this genre alive and dynamic. Its members made the foundational commitment to continue with the task of disseminating citizen music, one of the most prolific genres of Argentine music. Free and free entry.

Steel Trust is a rock band from Río Cuarto made up of five young musicians: Juan Mariani (guitar), Facundo Lucero (keyboard), Valentino Bonetto (bass), Constanza Scandizzi (vocals) and Felipe Miralles (drums). It is characterized by making covers of classic rock songs in English from the 80s and 90s. The repertoire also includes some quieter melodies, reversals of other styles, some classics in Spanish and own compositions. Entry 300 pesos.

The formation made up of Walter Barraza (hangdrum and accessories), Juan Carlos Pesci (keyboard and accessories) and Daniel Livadiotis (percussion and accessories) presents “Trío Fusion”, a show where they display the style of the trio based on improvisations that can be framed within the World Music, merging different currents such as African, Eastern, American music, among others.

At 10. Conversation: “NFTart: before a new paradigm”

Conversation aimed at disseminating the new modalities and scope of the so-called crypto art by Gabriela Barrionuevo, Fabián Arias and Andrés Borella. It is aimed at artists and the general public. Limited availability. Free registration via email: [email protected]

Within the framework of the world celebrations for the 11th anniversary of International Jazz Day, a date that has become the largest annual jazz celebration in the world, an improvised music meeting is held where you can enjoy a show in which jazz musicians improvise freely. The improvisers will meet for a celebration in the noblest tradition of the genre, the novelty is that the public will be able to join with their wind instrument if they are a worshiper of the jazz tradition.

International Jazz Day is a global movement, where people from all continents celebrate through educational programs, debates and presentations throughout the day. Free and free entry.

Villa María Regional Production Center, Córdoba Audiovisual Center – Bv. Carcano and Alighieri- Villa Maria
The 3rd edition of this outdoor music festival is held and to be enjoyed with the family in the town of Villa María. Covering the different genres that have references in the locality, the following are presented: Shalaku, La Doble Néstor, Chamán Chamán, and Phyllobates together with the host group La Cantarola. Free and free entry

The Cordoban folkloric band formed by Leo Escalante, Claudio Tais, Gabriel Romero and Maty Seia performs in the capital of Cordoba in an exclusive show before representing our country at the Argentine festival in Washington. All the songs of the band and the classics of folklore will be in a magical night full of music and good times in a unique concert. General admission $1000 through the Autoentrada.com system

Rocío Heredia is a singer-songwriter born in Monte Leña, Córdoba. It was there that she began her discovery and pleasure in music and songs in particular. She currently resides in the city of Villa María. In December 2021, she presented her first EP called “Primer Movimiento” which has five songs of her authorship that reflect an inner landscape, like photos of something lived and felt mixed with the music that accompanied her throughout the year. throughout her life. On this occasion she presents them in an intimate format of guitar and voice. It can be followed on YouTube CulturaCBA.

Kirgin is an enterprise that arises in Córdoba Capital making classic and timeless garments, looking for production alternatives that protect the environment and its community. Garments made with fibers that have a lower environmental impact, durable and resistant, 100% natural. Its priority is set on transparently showing the production processes: who made the clothing and where the fibers that compose it come from. Photography and editing: Bron Violeta. Instagram: kirgin.store / Page: www.kirgin.com.ar. You can follow it on YouTube CulturaCBA