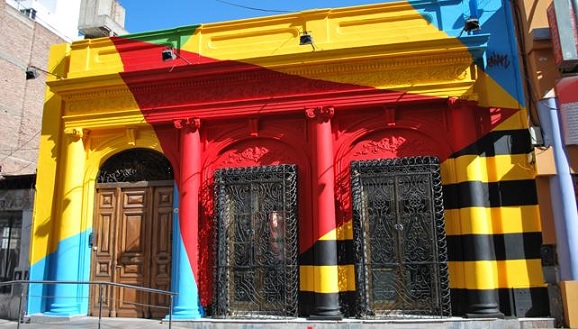 “In this chaotic, incomprehensible and semi-apocalyptic world that we have to inhabit, we are happy to continue being here, standing and with all the handle to celebrate a new birthday. And if it is about wishes, we close our eyes and ask for a new year of cultural teamwork, full of diverse projects, challenges and, as always, accompanied by all of you: the people who live in our house every day”. In this way, the members of the staff of the Centro Cultural España Córdoba, communicated their desires for what follows this year.

It is worth mentioning that the meetings will be with free admission, on a first-come, first-served basis. For those who are interested, they can obtain more information about it by entering the website ccec.org.ar.

An active training proposal to solve in the simplest and most immediate way the problems that any production initiative for a performing arts show generates right now.

Who is it for?

Aimed at people in training or recently incorporated into the effective world, with projects, doubts, conflicts and a desire to get out of conformist rhetoric to explore other ways of doing things.

How to take part?

To participate you must complete the following form, the quota is 15 people. Open call until April 10 or until quota is exhausted.

The methodology will consist of a first phase where all the elements that concur in the process of ideation, writing, preparation, production, rehearsal, representation, dissemination and tour in the Ibero-American sphere will be quickly analyzed.

The second part, based on these premises and with specific cases proposed by the participants, we will create mock productions.

Presentation of the book

Who wants to be a superhero?

The book is an extensive essay in which Andrés addresses the phenomenon of superheroes from different perspectives: their evolution over the decades, their impact on popular culture, the internal logic of the stories… There are more “hard-standing” sections », others more theoretical and others more controversial, but it seems to me that anyone who is interested in the subject of superheroes is going to get hooked, whether they have 40 years of reading comics behind them, or simply get excited about the series and movies.

Andrés Accorsi has a degree in Political Science but has worked in the field of Comics since 1987. He directed fanzines, magazines and conventions; he gave talks and seminars at conferences and universities in Argentina, Uruguay, Paraguay, Chile, Bolivia, Peru, Mexico, Spain, Portugal and the US.

He currently directs the website Comiqueando Online and the magazine Comiqueando Digital, writes the blog 365 Comics por Año and makes videos for YouTube. Before the pandemic, she worked in the organization of cultural events, among which the Cartoon Days of the University of Palermo and the Comicópolis international cartoon festival stand out.

The Spain Córdoba Cultural Center together with the Epistolary Documentation Center presents the multimedia exhibition:

Available from March 23 to April 22

The letter that remains as a testimony of the time of silence and darkness is transformed into a cry and light, the traces of resistance of a memory marked by fire. From those lines hang not only heartless words, but also the present body of the person who wrote it.

The exhibition can be visited free of charge at the CCEC (Entre Ríos 40) during the usual opening hours of the house, from Monday to Friday from 10:00 to 21:30.

The intimate traces in the form of letters that cross distances and times, generally come to moderate the restlessness of brief, circumstantial absences. But what happens when that absence is infinitely more painful, constant? The letter that remains as a testimony of the time of silence and darkness is transformed into a cry and light, the traces of resistance of a memory marked by fire. From those lines hang not only heartless words, but also the present body of the person who wrote it.

Letters from missing men and women are exhibited here, transforming the past into a constant present, testifying to commitment and also to love; Letters from family members are also shown that persist as a prayer over time, and become an echo of that memory, correspondence with the struggle from the hereafter, life drive; and political letters, cries that are amplified through the mimeograph, the graphic press and, more recently, digital networks.

These letters about the last military dictatorship in Argentina breathe like that body that resists suffocation. Rather, they are oxygen that keeps the flame of good memory alive.

The CDE is a project that values ​​the menu as a device for dialogue and as an essential mark of collective memory. Its objective is to preserve and enable the circulation of these identity materials through a digital archive of letters, telegrams and postcards. They find it at www.sobrecartas.com