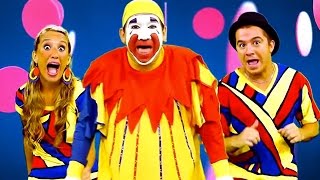 Days ago, it was Piñón Fijo himself who set off the alarms with a publication on his social networks in which a little girl was seen with the following text: “My beautiful crazy lady! We will see each other again and I will enjoy your hugs. I love and miss you!” In addition, he added the hashtags #rightgrandchildren and #rightgrandparents.

“I haven’t seen my father for 8 months because he is missing from our lives after the last of so many abuses (in my 32nd week of pregnancy). And it was the last because I decided to limit chronic humiliation after 35 years.” Solcito Fijo said in the release in which she denounces family mistreatment by her father.

Now, the controversy is increasing more and more with the unusual theory of Ivanna Martin, a friend of Piñón’s daughter, who in dialogue with AmericaTV assured that one of the most popular songs of the Cordovan clown has a dark background. “The Chú Chú uá was created to make fun of children with different capacities”, he pointed out

Asked by one of the channel’s hosts about whether Piñon fixed knew the meaning of the lyrics, Ivana replied: “No, I’m sure not. Otherwise, I wouldn’t have taken it to make it a success.”