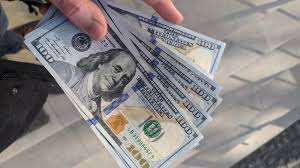 The blue dollar extended its bullish streak for the second consecutive day and closed at $208 at the selling point, its highest price since last February, according to the main marginal exchange market prices.

The parallel dollar was bought at $205 and increased $2 in the sale, reaching its highest value since last February 25, when it was quoted at $211. The gap between the blue dollar and the official wholesale exchange rate exceeded 71%, its largest difference in the last 12 months, and the spread with the official dollar amounts to 64.1%.

The retail dollar without taxes increased 12 cents to $126.77 and at Banco Nación the price rose 25 cents to $126.50 for sale. The savings or solidarity, which includes taxes, exceeded $209.17 for the first time, closed for the eighth consecutive day above the informal exchange rate and remained above the blue and the MEP.

The Central Bank again recorded minimum purchases in the market of only US$2 million, taking the result for the month to some 17 million net purchases, far from the expectations generated by the record income of the agro-export complex.