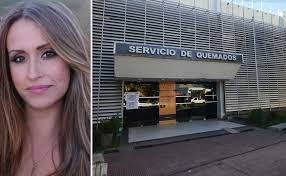 On Monday begins the trial for the femicide of Gabriela Lencina (43) who died after suffering very serious burns on her body when she was attacked by her partner in a house in Coronel Olmedo, in the southern area of ​​the city of Córdoba.

The main accused is Cristian Sebastián Videla who is accused of the crime of “Homicide qualified by the link and by mediating gender violence”, a crime that has the only penalty of life imprisonment. The case will be held in the City’s 2nd Nomination Criminal and Correctional Chamber.

The brutal attack occurred on December 27, when Lencina and Videla were inside their home. The woman’s screams alerted the neighbors, who entered the building and helped Lencina who was on fire.

The people who assisted Lencina managed to put out the flames, moments later police officers and an ambulance from a private emergency service showed up, and proceeded to transfer the woman to the Burn Institute. There it was found that the woman had 30% of her body burned.

Lencina remained hospitalized in a very serious condition, but after 9 days she ended up dying due to multiple organ failure as a result of extensive burns.