they closed the hype to a street artist • Channel C 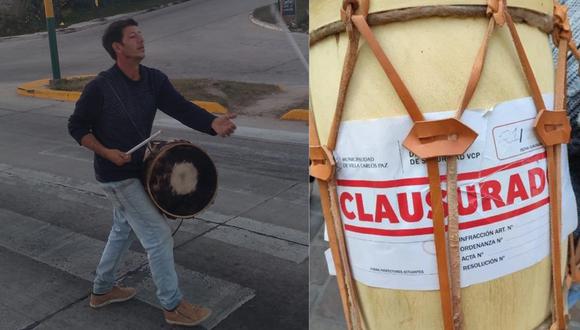 Miguel Fernández, the protagonist of this story, was playing his bass drum during the time allowed by the traffic light, while his wife Rosario was selling bread a few meters from him. Suddenly, some municipal inspectors were present to claim them.

“I tried to explain to them that we went to ask for the permits, but that they never gave us, that we have a family, two children and that it is our job, to which they told us: you started with a box of bread and now you have a SME here” He reported on his Facebook account.

According to his account, the inspectors reacted in a “disparaging” way to Miguel’s comments and even called the police. They not only managed to seize the musical instrument, but also the couple’s merchandise.

The authorities told him that he will no longer be able to work at the corner of Bulevar Sarmiento and Scarlatti. Otherwise, the instrument will be permanently withheld.

doWhat does the ordinance of street artists say in Villa Carlos Paz?

Specifically, in its article No. 3, it designates “the Directorate of Culture and Education, as the competent area to grant permits to artists whose professional modality is displayed on public roads, such as: musicians, puppeteers, magicians, jugglers, engravers on different supports, living statues, dancers, painters, theatrical actors, to perform in squares, parks, beaches and public walks, duly approved by the Directorate of the General Inspectorate and the Directorate and the Parks and Walks area”.

To do this, it forces the same agency to carry out in October and November the call for artists to modify the Registry of Street Artists, to whom various public spaces are assigned so that they can work.

As for the enabled sites, in its article No. 11 it defines them in different categories or zones.

“Plazas: the CAS, the Solar Clock, the Cu Cú Clock, Manuel Belgrano, Plazoleta Carlos Paz and others located in the neighborhoods. Public Walks: of the Ducks, of the Culture and the one located on the Bernardo D`Elía waterfront. Semi-pedestrian and pedestrian: in these spaces, artists who do not occupy more than 1 m2 with their showcase and/or musical instrument will be authorized, not being able to display elements (paintings, chairs for the public, amplification equipment for music, etc.) on the sidewalk and/or public roads, in full accordance with Ordinance 2752 (art. 1 – 4 and 5) and Decrees 359/A/05, 035/B/06 and 893/B/07 and Ordinance 3624. All other sectors that it be under municipal control, and that it be previously approved by the competent areas of the General Inspectorate and of Parks and Walks”.