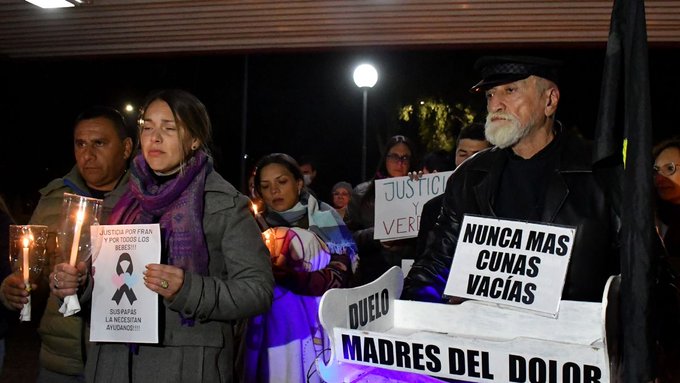 Relatives of babies born healthy, and who died hours later at the Ramón Carrillo Maternal Neonatal Hospital, mobilized yesterday with torches, to insist on “speed in the investigation, justice for the victims and punishment of those responsible”.

So far, there are five cases of deceased babies investigated by the justice system, although daily testimonies continue to be added about similar events or cases in which the babies managed to survive after suffering decompensation due to similar critical conditions, and without responses from the professionals of the Health.

The mothers, fathers and relatives of the deceased babies carried out a “torch march” last night in front of the public hospital, located in the Poeta Lugones neighborhood, carrying lighted candles to ask for “truth and justice”.

In that place, testimonies were heard from those who said that they themselves or in some cases members of the family environment, suffered acts of “neglect, mistreatment and obstetric violence” in that provincial care center.

With significant participation, the peaceful demonstration, which carried lighted candles, posters of images with babies and made claims of “Justice”was concentrated in the area of ​​access to the assistance center dependent on the provincial government, with a strong security operation in the surroundings.

Among the new testimonies, another young mother, whose baby died at birth in 2021, asked the justice system to “The cases of last year are also investigated”like Lorena, whose son suffered three cardiorespiratory arrests shortly after birth, on February 28 of last year, and after his death she was informed that “decompensated due to multi-organ failure”.

The judicial investigation has been going on for a week since the case became known and, to date, prosecutor Raúl Garzón has not issued procedural measures on accusations or arrests.