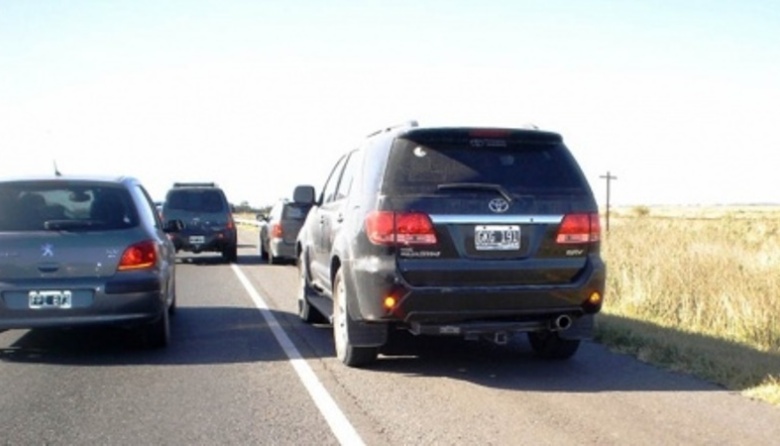 The Ministry of Transportation of the Nation, through the National Road Safety Agency (ANSV), will deploy this long weekend a new control on the country’s routes and will sanction those who drive on the shoulder.
As reported, between April 13 and 17, a Road Safety Monitoring Center installed at the Hudson toll will operate from where an anti-banker operation will be deployed, with the aim of sanctioning those who drive on the shoulder, understanding that it is of conduct punishable by the National Traffic Law.

«The shoulders must be safe spaces for emergency maneuvers in specific situations such as punctures, mechanical damage, among others. Never to stop or to move faster, putting your own safety and that of others at risk. That is why we are going to be inflexible when it comes to controlling this type of attitude and sanctioning those who do not respect the rules, “said the Minister of Transport, Alexis Guerrera.

The ANSV reported that there are two banker detection processes: one when the driver is identified by the drones that take the images and identify the offenders, and they will be processed at the Monitoring Center where the infraction record will be drawn up and the judge of infractions will be consulted. In this case, the notification is after the fact.

🚘✅ We share these tips so that during this long weekend you travel safely. It doesn’t matter if you do it by motorcycle, car or long-distance bus, be responsible, take care of your life and that of others. #TravelSafe pic.twitter.com/CVg8lOBxpy

Meanwhile, the other process is when the control is carried out by motorized agents who recognize an offender and, in this case, the driver will be immediately arrested.

In addition, the usual documentation controls will be carried out on private vehicles and long-distance buses, highlighting awareness about the use of seat belts and zero alcohol at the wheel.

It was also reported that the images received by nine drones that will patrol different points of Provincial Route 2 and Provincial Route 11, on the way to the Argentine coast, will be inspected from the Monitoring Center, in addition to receiving and processing control results there. random and motorized agents.

Referring to the bankers, Pablo Martínez Carignano, executive director of the ANSV, indicated: “This administration decided not to tolerate the bankers for another minute. Driving on the shoulder is not only a prohibited behavior, but it also generates danger and causes a lot of anger to those who comply with the rules and have to see how the supposedly alive pass by the side, believing that their time is worth more than that of others. Let them know that we are going to be there to sanction them.”

Recommendations for those who undertake trips this long weekend:

– Do not consume alcohol before driving.
– Avoid reckless maneuvers such as undue overtaking and distractions such as cell phone use.
– Start the trip with enough rest.
– That all occupants are fastened with a seat belt if the trip is by car, and with a helmet and reflective vests if it is by motorcycle.
– Respect the speed limits and road markings.