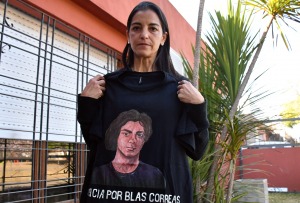 Starting next Wednesday, the trial will begin with popular juries for the crime of Valentino Blas Correas. The teenager was 17 years old and was shot dead during a security control operation, in August 2020, in the city of Córdoba.

The opening of the public hearing is scheduled for 9 o’clock on Wednesday, September 7, at the courthouse, and will be in charge of the technical court of the 8th Chamber. of Crime and with a popular jury, 8 regulars and 8 alternates.

Two years after the crime and days before the trial against 13 police officers begins, we accompany the loved ones of #BlasCorreas in his request for justice.

The Nation’s Human Rights Secretariat will participate as ‘amicus curiae’ (voluntary legal advisers to the Court), while Amnesty International requested to be admitted as an ‘observer’ of the trial.

“In this trial, the institutional responsibility of the police and the guilt of the officers will be demonstrated, but unfortunately the political leaders who have much to say will not be present,” said Soledad Laciar, Valentino’s mother.

“There are thirteen defendants who, with varying degrees of responsibility, snatched my son. There is plenty of evidence for them to be convicted. I return home without him, but let the fight serve so that it does not happen again,” said the woman. , who will be represented by the lawyer Alejandro Pérez Moreno.

In this case there are three employees of that sanatorium (Sergio Casalino Guadalupe Moya and Paola Andrea Mezzacapo) are accused of ‘abandonment of person’ and ‘omission of assistance’.

The charges faced by the latter are ‘false testimony, cover-up due to personal favor aggravated by functional quality and omission of duties as a public official.’

During the debate, it will be the prosecutors Fernando López Villagra and Marcelo Hidalgo who will seek to prove these accusations.