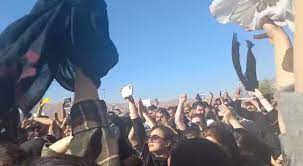 Iran is experiencing days of great turmoil due to a series of protests that took place throughout the country as a sign of protest over the death of Mahsa Amini, a 22-year-old girl who was detained by the regime’s “morality police” theocratic for not wearing the veil “properly.”

After this event, various videos began to circulate on social networks where you can see shocking scenes of the demonstrations in different parts of the country. One of them shows the symbolic moment in which a group of women in Saghez, a city in the Kurdistan province of Iran, took off their veils in protest at the murder of Mahsa Amini at the hands of the police and chanting “death to the dictator! !”.

Read also: Neonatal hospital case: they will examine the eight babies who had complications and survived

Iranian journalist Masih Alinejad shared those images on Twitter and commented: “Removing the hijab is a punishable offense in Iran. We call on women and men around the world to stand in solidarity.”

For its part, Amnesty International (AI) called for a thorough investigation to be carried out since it is suspected that the young woman’s death occurred in police custody. In addition, they assured that the laws that make the veil mandatory are “abusive, degrading and discriminatory.”