What are you going to do this week in the city? • Channel C 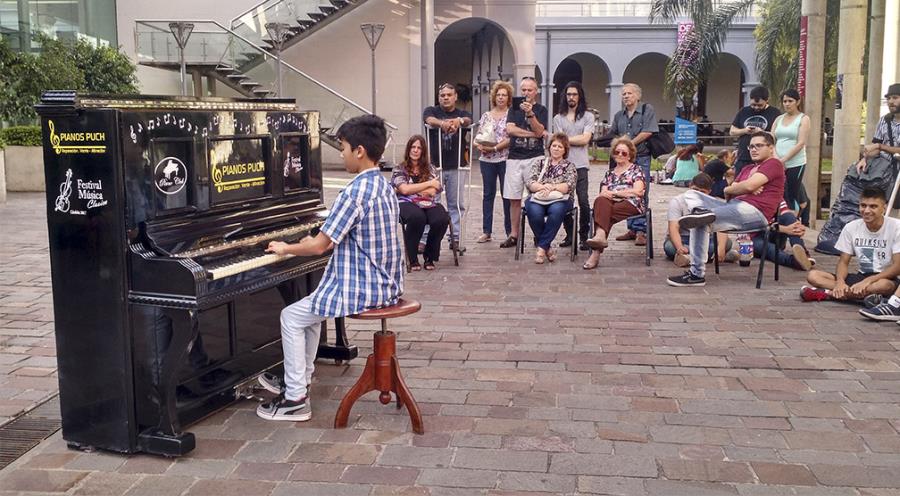 At 9:00 p.m., there will be a virtual visit to the exhibition “Itineraries” by Nora Iniesta. “Exhibited in room 2 of the Emilio Caraffa Museum, the artist Nora Iniesta and the curator of the exhibition tell us about the works: collages and objects with a reference to the history of our country, a compilation of works from different periods”, it was forward.

It can be followed at www.youtube/CulturaCBA.

At 6:30 p.m., the Film Series at the Palace will take place at the Museo Evita – Palacio Ferreyra (Av. Hipólito Yrigoyen 511), where the film “El Cuadrado” (Sweden, 2017), by Ruben Östlund, will be screened. . “Christian, manager of a contemporary art museum, is in charge of an exhibition entitled «The Square» in which there is an installation that promotes human and altruistic values. One day his cell phone and wallet are stolen in the middle of the street, an incident that will cause more consequences than expected,” advances the synopsis. Admission will be free and free.

At 9:00 p.m. it will be the turn of “Musicians Producing. Brief meeting with Sere Belingeri”. “Music accompanies her since she was little since her grandparents were musicians and she grew up with them accompanying them in different presentations they made. She started doing tangos. In 2019 she rediscovered music when she moved to Córdoba to study. She collaborated as a session player and performer with various artists in the city. She is currently studying the Superior Vocalist technique at La Colmena and integrates Black Human, a project of soul music, funk, r & b, pop, among others. And Lucky Soul a musical trio with Martin Moretto (Guitar) and Fernando Méndez (Bass)”, she anticipates.

It can be followed at www.youtube/CulturaCBA.

🎬 Cinema at the Museum! 👏 The Evita Palacio Ferreyra Museum continues with the cycle #CinemaInThePalacewhich screens films starring museums around the world.
👉 This week: “The Square”, (by Ruben Östlund, 2017)
👉 Tuesday 19, 6:30 p.m.
👉#FREE

Are you going to miss it?😜 pic.twitter.com/ULpiThlYha

At 9:00 p.m., “From the Selma Samanta Rched Abugauch Atelier” will arrive. “The artist uses the technique of oil painting on canvas, with a first photographic and film record of the models and then composes the sketches digitally on the PC to later carry it out on the support. She works in many layers of paint through glazes, playing with the texture of the material, trying to use painting as a discipline beyond technique. Her workshop is nomadic, for her the workshop is the place and the environment that makes it up, right now it is in a high-rise apartment in the historic center of the city of Córdoba. As a child she painted with her painter grandfather who made her admire the classics from an early age, that’s why she takes her surname Abugauch. Her main reference is her teacher, Diego Dayer”, she anticipates. It can be followed at www.youtube/CulturaCBA.

At 8:30 p.m., “Portrait of a Woman with a Harp” is presented at the Teatro Real (San Jerónimo 66). “A work by the music-theater company Lucy la Nuit that proposes, through an archaeological search for historical reconstruction, to rescue and make known the artistic, vital and political trajectory of Esmeralda Cervantes: the harpist of Queen Elizabeth II. A documentary, narrative and creative piece is presented whose problem revolves around this figure and its historical moment, ”they say from the organization. Tickets have a value of 600 pesos and are available through the site ventas.autoentrada.com and at the theater box office. The show repeats on Friday the 22nd, Saturday the 23rd and Sunday the 24th at 8:30 p.m.

At 9:00 p.m. it will be Córdoba se Anima’s turn with the presentation of ‘Puntos’”, an Animation Cycle with different techniques that narrate very diverse stories, selected by APA (Córdoba Animation Producers Association). In this opportunity it is presented “Points” by Patricia Gualpa with Stop motion technique. “’Points’ is a window. A series of lively interviews, whose central theme is diversity, seeks to account for the validity and heterogeneity of points of view”, advances the synopsis. It can be followed at www.youtube/CulturaCBA.

At 6:30 p.m., “Cordobeses Feminisms / Film Archive Projection” is presented at the Córdoba Cultural Center (Av. Poeta Lugones 401). “With the intention of contributing to the visibility and documentation of stories that are part of the Historical and Collective Memory of feminism in Latin America and its contribution to the construction of democracy, a team of feminists from Cordoba convened by the Juana Manuela Civil Association Gorriti – Nosotras en el Mundo Network – undertook in 2015 an ‘Annual Cycle of Reconstruction of the Historical and Collective Memory of Feminisms from Cordoba’”, they express from the organization and add: “For this, they were generating spaces for reflection and debate among feminist activists about the political and production practices of the feminist movements in Córdoba and have contributed to the process and construction of the digital archive, still in transformation, that compiles the history of feminism in Córdoba from the sixties to the present day”. Admission will be free and free.

At 9:00 p.m. “Culture in the Patio: Duo Mapas presents ‘Vientos’” arrives. “Andean winds, bass, voices and programming merge in this show through own compositions and Latin American repertoire. Pamela Merchán and Mateo Martino mix the traditional with the contemporary, the analogical with the digital, a folkloric sound with a renovating electronic touch to take us on a trip to different places in Latin America”, he anticipates. It can be followed at www.youtube/CulturaCBA.

At 3 pm “Piano Libre” arrives at Paseo del Buen Pastor (Hipólito Yrigoyen 325). In the green spaces of the multispace, a new meeting of this cycle of open-air piano concerts is held, which aims to promote the meeting of classical and popular music. “The instrument with its characteristic black and white keys is installed in one of the corners of the promenade so that passersby who pass by can play it and share its music with the rest. In this way, anyone with some knowledge of the piano becomes, for a moment, the protagonist of this black and white club”, they say from the organization. The event will be from 3:00 p.m. to 6:00 p.m., with free admission.

At 3:00 p.m. it will be the turn of “Calavera yes screams” at the Emilio Caraffa Museum (Av. Poeta Lugones 411). This is a face-to-face educational activity within the framework of Pablo Peisino’s “Chisporroteo” exhibition. “There will be a tour of the rooms and then an intervention workshop for t-shirts with scraps of fabric in the museum’s creation room,” they express from the space. The proposal is intended for adolescents and adults and will be free with limited space. Registration is made by phone at 4343348/49 ext. 215 from Monday to Friday from 8 a.m. to 2 p.m. or by mail: [email protected].

At 9:00 p.m. there will be a visit to the “Let it be” workshop. “Lingerie is considered, on the one hand, as a modeling garment, since it forms a certain silhouette sought after and longed for by women, imposed by fashion according to each era, and on the other, it has a symbolic and historical charge, which made it an element of seduction, liberation of women”, is anticipated. “In the following brand proposal, it is proposed to provide answers to many issues that are not being addressed in the sector, such as the mass production based on a single size and an ideal model of beauty. The lack of designs to satisfy the demand has led to inquire about a system of sizes with measures appropriate to reality, taking into account the body stereotypes of Argentine women. ‘Let it be’ offers a range of products with differentiated sizes”, they express from the workshop. It can be followed at www.youtube/CulturaCBA.